Get fresh music recommendations delivered to your inbox every Friday.
We've updated our Terms of Use. You can review the changes here.

The Feeling of Walking: Songs of 2020

by lisa butel and brent cross 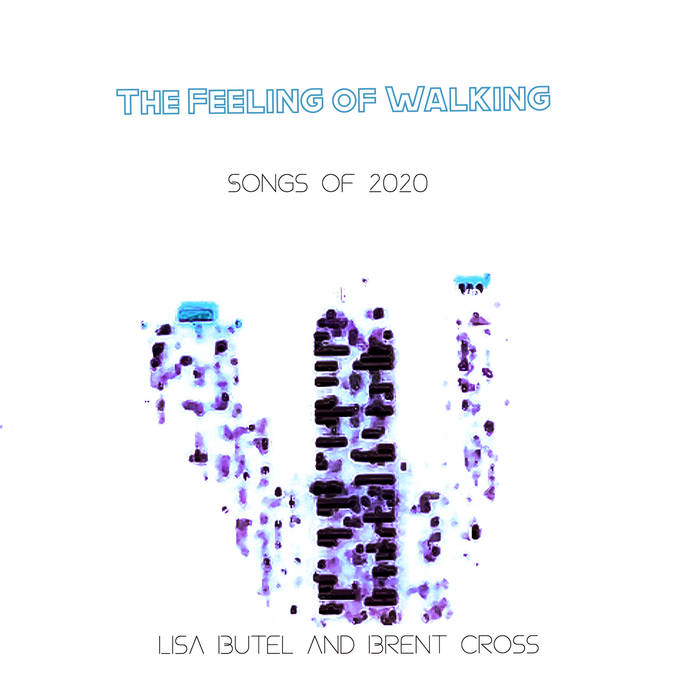 This album is the sound and the feeling of our personal experiences as the pandemic developed. Composed of disparate parts of ambient sounds from inside our family piano, noise from an analog oscillator and sampled/prepared piano and the comforting sounds of voice. This music was a meditational process that helped us deal with the isolation and anxiety that we all felt and continue to feel. The album cover is an inverted photograph of Brentwood mall skyscrapers as viewed from Hastings Sunrise park at night. We refer to this park as the "Look Out" which has become part of our nightly walking ritual where we can connect with the view of the landscapes and "power up".

"This month selection of choice music (as you may have noticed) is particularly heavy on voice/vocal experimentation; none so more then the double offerings from the Vancouver-based collaboration of sound artists, Lisa Butel and Brent Cross.

Another product of stress-relief and vehicle for abstract anxieties, feelings and terms of bereavement felt through the creation of music, during the harrowing and restrictive pandemic this sonic and empirical voiced partnership created a moiety of albums. As release valves for pent-up feelings of loss and isolation, these two album suites are full of blended and manipulated minimal synthesised sounds, piano accompaniments from a family heirloom, and a gauzy flow of uttered, elegiac, aria and tonal vocals.

A Low Lament For Love And Loss takes a one-hour improvised session and breaks it down into seven parts of varied elegy and ethereal sung mystique and diaphanous outpours. To a flutter, ripples and fuzzy synth undulations and drones, Butel’s voice yearns syllables and sounds. Often they sound otherworldly, or as in the case of the slowed, stripped Red Mecca era Cabaret Voltaire, buzzing and crisp Middle Eastern tinged ‘Intro To Lament’, like a mysterious call to prayer from atop of a minaret.

Wafted, drifted, translucent yet deeply felt that voice and accompaniment is entrancing but often tragic; dealing as it does from the loss of Cross’s mother, whose Heintzman piano can be heard throughout, fluctuating between sentimental tinkles, singular patted notes and melodious dreamy passages.

The Feeling Of Walking is in a very similar vein, though the process is a little different, using the voices as a sort of comfort and meditation. Opening beautiful gesture ‘I’m Giving Out The Love’ is like a mix of ambient generated dreaminess and slowcore; ‘Super Skies’ an almost monastic kind of poetry. There’s even a kind of Japanese dulcimer-like feel to the ghostly, delicate ‘The Beautiful Women’.

Two congruous releases of pent-up emotions delivered in the form of an experiment between voice, piano and a palette of purposeful oscillations and manipulations, Cross and Butel’s lockdown albums act as a personal process but above all sound fully immersive and cathartic: A communal, connective experience."

2022
Preparation for new release in May.

Bandcamp Daily  your guide to the world of Bandcamp

Alex Rita and Errol from Touching Bass feature in our special London edition of the Bandcamp Weekly.